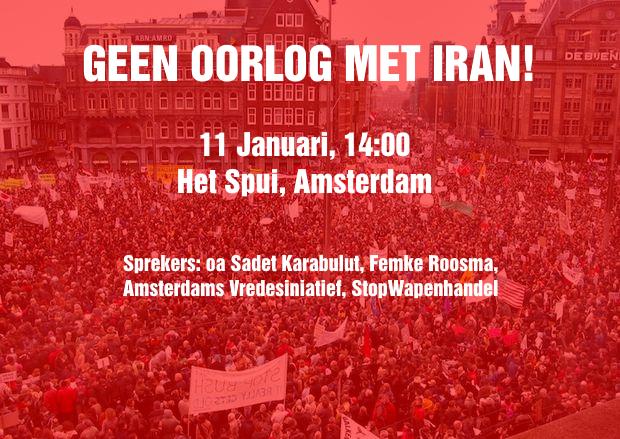 The Amsterdam seminar on Euromilitarism

Starting from a basal criticism of American imperialism that absorbs the EU member states by way of NATO, or rather from a concern about the American Alleingang and the unreliability as an ally under Trump, there is more and more a louder call to set up a European army and a separate European arms industry, so that 'Europe' can take care for its own safety. That call is sometimes also heard in parts of the (European) peace movement. But is a military Europe really a beckoning alternative for NATO? Or have we as a peace movement the task to outline other alternatives?
This was the theme of one of the three workshops (besides the ones over arms trade and international solidarity) during a Peace Day (Vredesdag) of the Dutch Socialist Party and its youth organization Rood on Saturday April 13 in Amsterdam with a good turnout. The same issue was debated at an international seminar in Amsterdam that was organized by the No to War – No to NATO network, anti-militarist bureau VD AMOK and Oorlog is geen Oplossing (War is no Solution).

European militarism
International guests like Roger Cole from the Irish Peace And Neutrality Alliance (PANA) were invited. Starting from Irish history as the nearest and oldest colony of the British Empire, he made immediately clear that Europeans must not think that imperialism at the present time is only an American affair. Colonialism sits in the European genes, Cole said, the only thing is that they now can no longer fulfill it as separate states.
He sees the European Union more and more as a cooperation of European colonial powers to pool their imperialist efforts and serve their interests together. That the European Union is listening slavishly to international enterprise and tries to build a common military power says it all. This EU becomes estranged from its own citizens and according to Cole the choice is now between empire or democracy. In the long term the two do not go together.

Peace or Profit
This general line of thought became more elaborated in the other contributions to the first part of the international seminar, that had the expansion of Europe as a global player as subject. Katrin Vogler, member of the German Bundestag for die Linke, stressed that in the beginning the economic cooperation in Europe was mainly aimed at the advancement of peace between former enemies, but nowadays above all things at expansion and serving of economic interests outside the EU area. European enterprise loosens itself more and more through mergers across the borders from national rules, whereas European rules are mainly intended to promote the free market en certain economic sectors.
As an example she took the European arms industry. If the German government, after a lot of pressure from the population finally proceeds to an arms boycott of Saudi Arabia, it turns out in the end that it only relates to weapons that are completely produced in Germany. This is less and less the case and therefore you need co-operation of other EU member states or the EU as a whole for an effective boycott. And so the European democracies lose their grip on the economic traffic inside the EU more and more and for the member states it becomes continually more difficult to choose for peace instead of for profit.

War on migrants
Mark Akkerman, researcher at Stop Wapenhandel (Stop the Arms Trade) showed how European military power at this moment especially is employed in the war against refugees that is conducted mainly around the Mediterranean, but also deeper and deeper inside Africa. Deals are being concluded with regimes that often violate human rights, whereby these regimes promise to prevent the refugees access to the Mediterranean in exchange for the necessary weapons and training, delivered by the EU. The expenses for the military defence of the European external borders (against refugees; not against enemy armies) have enormously increased in the past and especially in the coming years. Apart from the European armies it is mainly the European defence and security industry that profits.
These developments are also withdrawn from democratic control as they fall under the European security and defence policy that is the exclusive responsibility of the European Council of ministers. They can not be called to account by the European parliament, but exclusively by their own national parliaments that cannot control the voting of their ministers in the Council. Instead of the democratically elected representatives it is the European arms industry that has their fingers in the decision making through their extensive lobby in Brussels and the official advisory bodies of the EU, where this industry is amply represented.

War economies
That Europe could rise economically and militarily once again to the status of imperial power is doubted by Kees van der Pijl, retired professor in political economy. He states that European countries at the moment barely have an industrial sector of significance and that Europe is on its way to lose economic importance like Latin America earlier. On a world scale the US and China will dominate above all, maybe in some degree together with Russia. The only exception inside the EU is Germany, that still has the disposal of an industry of some importance and has developed in the last years as the central power engine of the EU.
The position that the EU still occupies in the world economy has to do with the post-war arrangements and piggybacking with the leading position of the US which is also not due to its industrial sector but mainly to the position of the dollar. That position is now under pressure and is weakening further with each new financial crisis. If the US loses its dominant position in the Middle East, the leading position that it still holds will be finished.
The group around Trump now in power represent the interests of the industrial sector in the US. That is why there is a trade war with China and the negotiations on several free trade agreements were halted when Trump took power. The estrangement between the US and Europe has everything to do with the fact that the interests of the industrial sector of the US lie not in Europe, whereas the financial sector in the US that staked their money on Hillary Clinton in the last election, would profit from these relations.
In parts of the European peace movement there was some sympathy for Trump in the beginning because he called the NATO outdated and did not want to use the US as the world policeman, whereas Hillary Clinton showed herself a supporter of military interventions and was prepared to start a war against Syria. Van der Pijl points out that Trump certainly is no peace dove. Whereas the interests of the financial sector represented by Clinton lie in the intervention wars, those of the industrial sector represented by Trump run more together with the enormous arms production and arms trade. That is why Trump keeps insisting on the increase of the European defence budgets.

Whither Europe?
"After Brexit four of five biggest cities in Europe will lie outside the EU." said Karin Vogler, thus stressing the importance of making a difference between the security of the EU and the safety of Europe. The last two speakers, Kees Nieuwerth of the Quakers and SP senator Henk Overbeek, followed up by stressing the importance of the CVSE and economic cooperation between the EU and the Shanghai Cooperation Organization (SCO) to normalize the relations with Russia. The (supposed) threat of Russia plays an important role in the posture of both the defenders of NATO‚s continuing existence as the main security organization and the supporters of a militarization of the EU. The peace movement should not make a choice between the NATO and the military EU, but just like in the Cold War advance renewed economic cooperation. peace and security on the Eurasian continent.

This text in Dutch was included in VredesMagazine 2019/4, page 20 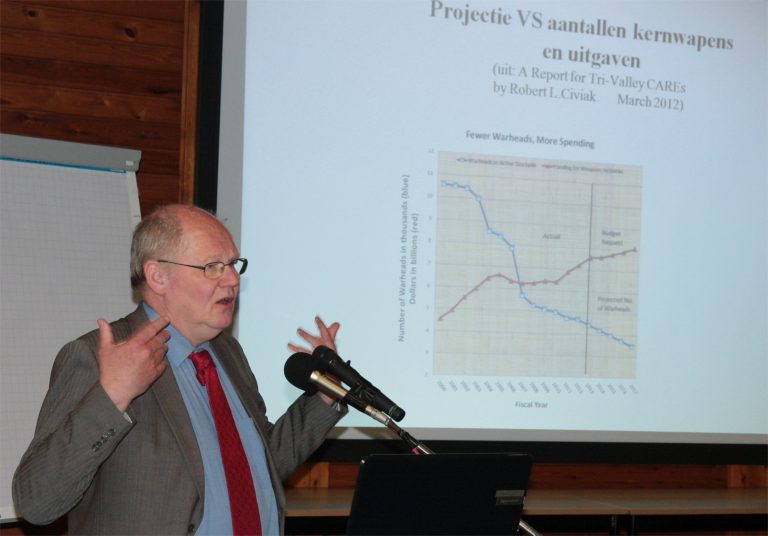 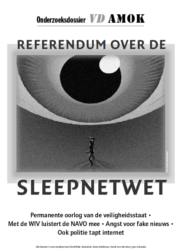